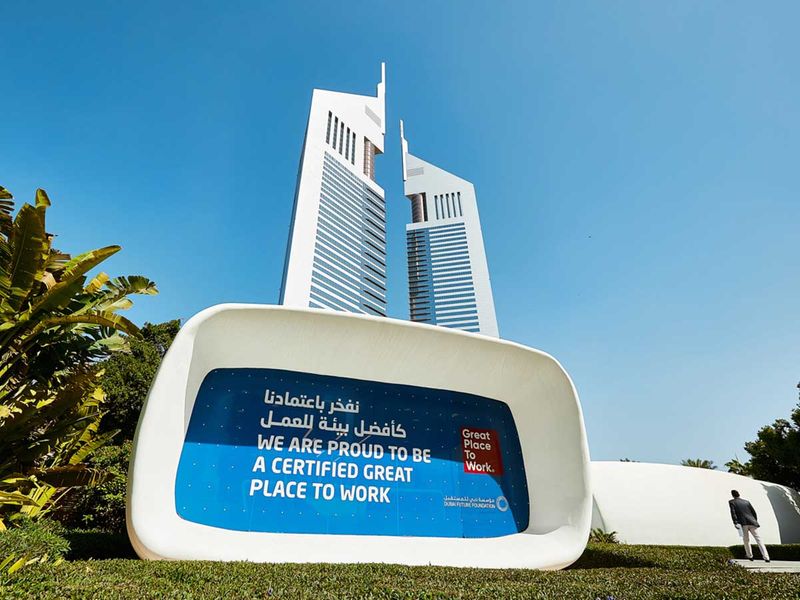 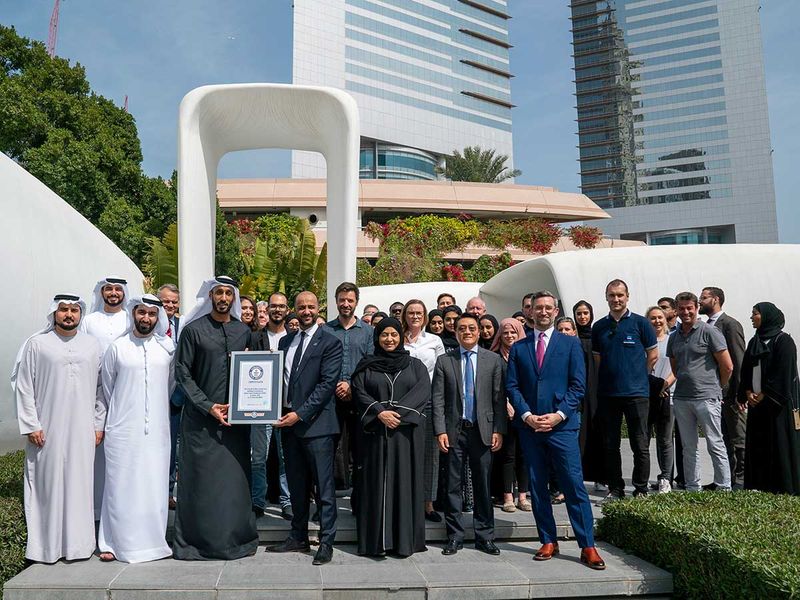 DFF’s Office of the Future was awarded the prestigious Guinness World Records™ certificate for building up the “First 3D-Printed Commercial Building” in the world at a ceremony held at Emirates Towers, Dubai, which was attended by Khalfan Belhoul, CEO of Dubai Future Foundation and Talal Omar, Director – MENA at Guinness World Records along with Foundation’s management and employees. Image Credit: Supplied

Created with just one printer which measured 20 feet high, 120 feet long and 40 feet wide, the construction of the Office of the Future used 50 percent less manpower than conventional buildings of a comparable size and produced 60 percent less construction waste. Image Credit: Supplied

Overall, it took 17 days to print, two days to install and three months to build, landscape and interior design. Today, the office is home to DFF’s Dubai Future Academy (DFAc), a knowledge hub that seeks to prepare generations of leaders with the skills and tools to understand and adopt emerging technology, as well as, address future challenges that are facing our world today. Image Credit: Supplied

Commenting on the award, Khalfan Belhoul said: The Office of the Future’s success in achieving this global recognition embodies the vision of the UAE leadership and their innovative spirit in realizing the importance of adopting emerging technology such as 3D Printing and using it in the development of vital sectors and the creation of new economic opportunities, further positioning Dubai and the UAE as a hub for innovation and a test bed for emerging technologies. Image Credit: Supplied He Continued: “Since its launch, the Office of the Future has contributed to enhancing the awareness of the importance of 3D printing technology, which is seen as a promising sector that provides billions of dollars in investment opportunities. It has also formed the first initiative aimed at achieving the outputs of the Dubai 3D printing strategy launched by His Highness Sheikh Mohammed bin Rashid Al Maktoum to develop a global model that can be applied anywhere around the world” Image Credit: Supplied 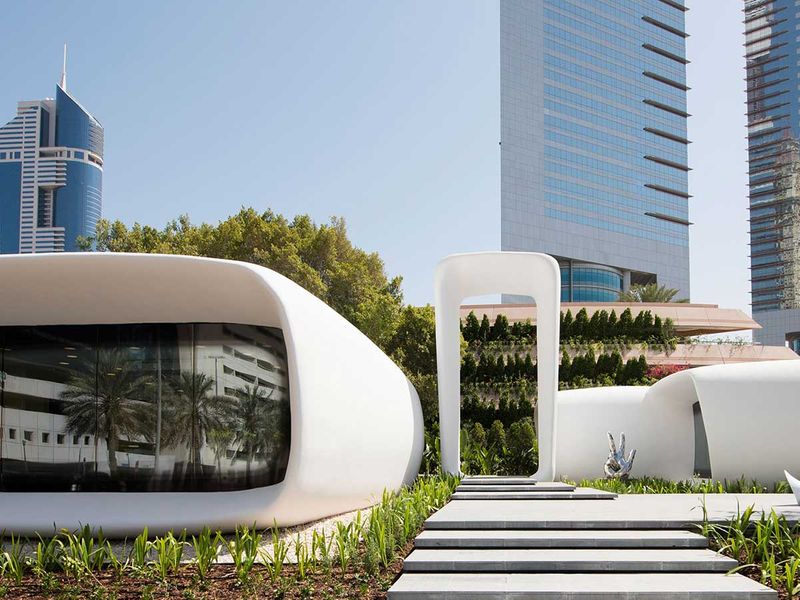 Talal Omar said: “The UAE continues to set the standards in global innovation, technology and sustainability. The country and its leaders are true pioneers that revolutionize industries such as construction. As the global authority on record-breaking we have constantly seen fascinating ways that the world is changing and today is another example of that. It gives me great pleasure to be here to present the certificate.” Image Credit: Supplied

The UAE is well on its way to becoming a major incubator of innovation and future technology in the world, and Dubai particularly, has showed no signs of slowing down. In line with the UAE’s Vision 2021 program, the Dubai government has devised a bold strategy to be the world’s most innovative city by 2021. Image Credit: Supplied

9 of 12
3D-printed office
Inaugurated in 2016, the Office of the Future is the first 3D-printed building of its kind and launched as part of the Dubai 3D Printing Strategy. While other projects have tested various elements of 3D printing before, the Office is the first real building to be built at scale, with full services, that people can use daily to create breakthrough projects and initiatives with partners around the world that can help shape the 21st century for the better. Image Credit: Gulf News Archives 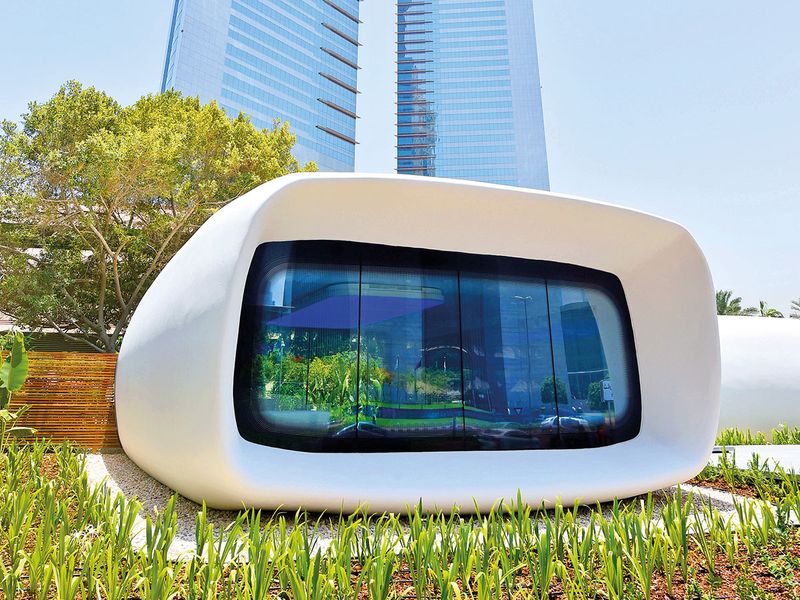 The building benefited from the hard work of many dedicated partners. The original design was drafted by Gensler Architects, then adapted and improved by Killa Design; designers of the Museum of the Future currently nearing completion in Dubai. Structural engineering was provided by Thornton Tomasetti, eConstruct and Freysinett. The interior design was developed and built by Projex, the furnishing and office layout was provided by Bene GmbH and the building’s striking landscape was designed by Cracknell. Image Credit: Gulf News Archives

Advanced materials were provided by BASF, Gulf Precast, NPPF and Golden Elements and its internal systems were designed and provided by Syska Hennessy, China State Construction, Siemens, IT Serve and Huawei. The building is a testament to what can be accomplished through collaboration and dedication to a common goal. Image Credit: AP 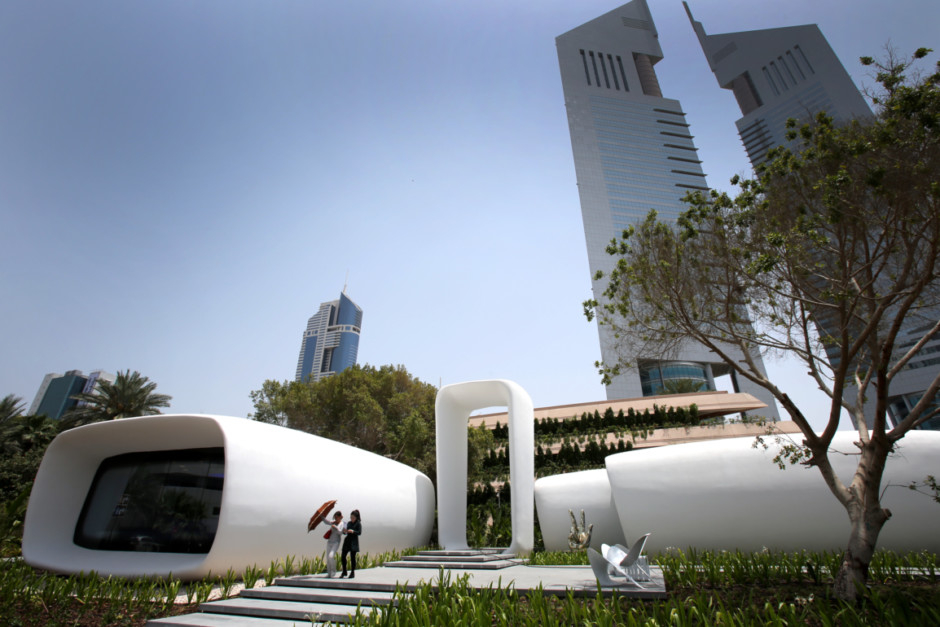 Currently the UAE hold over 400 Guinness World Records™ titles, of which Dubai has the lion share, making it the number one Arab city in record breaking. Among the UAE’s Guinness World Records™ titles are the Burj Khalifa, the tallest building in the world, the world’s Busiest airport for international passengers in Dubai International Airport , the world’s largest mall.. Remarkably, the UAE continues to raise the bar in breaking world records.

It’s all experiences now – a shopper gets a feel of Breathe salt rooms at The Wellery on...

How US tariffs are hurting Chinese exports December 12, 2019

The unexpected drop in China’s exports in November shows one reason why the nation wants to agree on...

The Western Group, whose head office is based in Panama, now has an office in Dubai, based in the heart of the free zone, in Dubai and we are committed to providing clients with a wide range of business services.